I’ve been reflecting lately on the rather vague term “Professional Piper” and have concluded that for someone not intimately familiar with piping culture, it can be a bit confusing. Consider this excerpt from the website of Portland’s “The Unipiper”:

Alternatively, as a professional piper with over a decade of experience, the Unipiper is equipped to perform in full highland dress, playing all the bagpipe standards, even without the unicycle – perfect for a more traditional wedding/gathering.

Like most in my (non-piping) line of work, I call myself a “Geographic Information Systems Professional.” I make maps, manage data, write scripts, and help City employees get their spatial analysis working correctly. The best part is, I get paid to do it! In addition to a four-year degree and many instructor-led and online training sessions in GIS technology, I am also certified as an “ArcGIS Desktop Associate” by Esri, the company that makes industry-standard GIS software. I can say this because I took a standardized exam (for which I had to study for several months) and received a passing grade. I got a certificate and a snazzy logo to put in the footer of my work emails. Folks in my profession can also apply to become a “GISP” which is a portfolio-based application process which takes into account your work experience, overall education, and contributions to the profession like writing articles, organizing GIS events, and things of that nature.

Here is the point, in case you were starting to wonder if I had one: Despite the credentials mentioned above, in GIS as in piping, there is no legal or industry-sanctioned credential required to earn income. While most GIS workers and paid bagpipers will receive at least some training or credentials, it is not a requirement for calling one’s-self a “professional.” In GIS, Esri technical certification and the GISP were introduced as a way for workers in the field to distinguish themselves. In piping, we have sanctioned competitions for bands and soloists, where competitors are divided into grades in which they compete for top prizes. Here is a very high-level overview of the grading in North American competitive piping:

So, while many pipers will claim to be “Professional,” this only means that they are paid to play (or have been at some point in the past). It does not reflect on the quality of the playing, the intonation of the bagpipe, or whether or not they will make 20 mistakes during the 15 minutes you have hired them to play.

I played in the amateur grades of the British Columbia Pipers Association for many years, and invested much sweat and tears to work my way up to the Professional Class. In 2006 I won the George Sheriff Amateur Invitational competition, which pits the top Grade 1 players from all major North American piping organizations against each other in a solo competition in Toronto, ON. Following that, I became a Professional Class player and have been competing against North America’s top pipers since then. 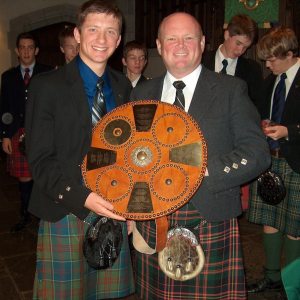 All of this is a long-winded way of saying that while many pipers will use the term, “Professional Piper,” it is not a meaningless phrase. Even among pipers who are paid for their services, when it comes to competitions (which is the most accurate and reliable means of assessing the quality of a bagpiper), some are Professional…

…and some are not.

Now, I would not be surprised if this post results in accusations of elitism, snobbishness, and general sour grapes because I’ve never been invited to play on Jimmy Kimmel. This commentary doesn’t concern me, because the intended audience for this post is people who hire pipers and want good music – not schtick, not gimmicks, and not second-rate playing passed off as the best around. I am not offering any policy proposals or advocating for the formation of a Pipers’ Union that would protect the income-earning potential of individuals who actually spent years of hard work to produce good sounds on the pipes. I do, however, offer this list of questions to ask the next piper you hire who claims to be a “Professional Piper” :

I would caution folks looking to hire a piper against hiring anyone who cannot answer these questions directly. There are certainly very good pipers competing in Grades 1, 2, 3, and even 4. However, be wary of pipers who bill themselves as “professional” without a competitive resume to back up the claim.

Don’t let THIS happen to you!