One of my favorite parts about going camping is the incredible variety in how you can “go camping.” For some, it’s an Army Navy surplus tent, tacos made on a Coleman camp stove, and marshmallows around the fire. For others, camping means taking the comforts of home into the great outdoors in a stylish and well-stocked RV. Other people still don’t consider it “real camping” unless it’s living out of a heavy backpack on a thirty mile trail, with only the stars, wildlife, and blisters for company.

Since I started to broaden my approach to the bagpipes nearly ten years ago, I have been similarly struck by how much diversity there is among the players and fans of not just highland pipes, but other types of pipes too. As a young piper, ahem…

…there’s really no way I could have imagined how many fun and varied playing experiences the instrument would bless me with. A lot of my friends in the competitive piping scene describe piping as a “lifestyle” probably because of the intensity of so many events, friends, bands, gear, and awesome music that one can experience as a player in that tradition. What I’ve come to realize is that there are in fact multiple piping “lifestyles” out there, each equally valid and delightful in it’s own way.

For a solo or band player at any level, any given Saturday may play out like this:

05:00: Wake up to the alarm, put on the coffee and cook a hearty breakfast. While that happens, double check the pipe case, make sure all parts of the uniform (kilt, hose, shirt, ghillie brogues, flashes, belt, sporran, jacket, and glengarry) are prepped by the door.

05:45: Make sandwiches for lunch and make sure sunscreen and cooler are prepped.

06:00: Pack pipes, uniform, lunches, cooler, and lawn chairs into the car. Drive for two hours to the highland games.

08:15: Check in with piping table and the steward at your competition platform.

09:00: Play the first competition of the day – solo piobaireachd. Brush out the drones and make sure the reeds are dry afterward.

13:00: The band warms up with a 10 minute tune-up, and 20 minutes of running through the competition material. This is to check the pipes for issues and get everyone comfortable for band competition.

13:30: This is as close to “down time” as we will get today. Walk around with buddies, check the final solo results, people watch, or sit in the shade of the band tent and take a nap. The pipe major needs you back at the band tent with pipes out by 15:00 sharp, and (as you’ve learned the hard way) you’d be a fool to not to heed those instructions!

14:50: You’ve been hydrating. Hit the bathroom and then get that band pipe out! IMPORTANT: Don’t forget to tuck your glengarry into your kilt.

17:15: Pack up the instrument, gear, and clean up the band tent. Then head over to the beer tent to catch up with old friends.

18:45: Head out to dinner with some bandmates. In the Northwest, odds are pretty good that this means Red Robin. Yum!

20:15: After a leisurely supper with a lot of laughs, head back home.

22:15: What a day! Exhausted, you unpack your gear and head straight to bed.

Now repeat this process about ten times every summer. Throw in plenty of indoor piping competitions, recitals, and pipe band gigs, like parades. Add weekly band practices, daily solo practices, and, let’s be honest, a ton of pipe band drama 😛 There you have it!

If you’ve ever been to a renaissance faire, you know that they can be hilarious, weird, raunchy, and charming all at the same time. When I was approached about joining Tartanic, I had never had the pleasure of attending one of these festivals. Boy was I in for a treat! Where else can you find fluent Elvish language speakers rubbing elbows with expert leatherworkers (tanners?) and hoisting a tankard with masters of medieval swordplay technique? Why not stroll over to the demonstration put on by 14-time Guinness World Record Holder for Whip Cracking?

I’m guessing that other countries likely have renaissance faires of their own, but to me it really does feel like a great fit for American culture: the variety, the escape from the day-to-day realities of a 9-5 job, the turkey legs, and the whimsical atmosphere where adults and children marvel at the same spectacles (although plenty of cheeky humor will be lost on the latter).

Playing with Tartanic at the faires it really hit me – there is something for everyone here. And there’s a huge appetite for piping! Playing in Tartanic was a lot of work but I was amazed at the energy and appreciation from the audiences – especially children – for the pipes.

Although sadly I haven’t made it out to play with Tartanic at a faire recently, I’ll never forget the camaraderie, friendliness, and eclectic nature of these incredible events. 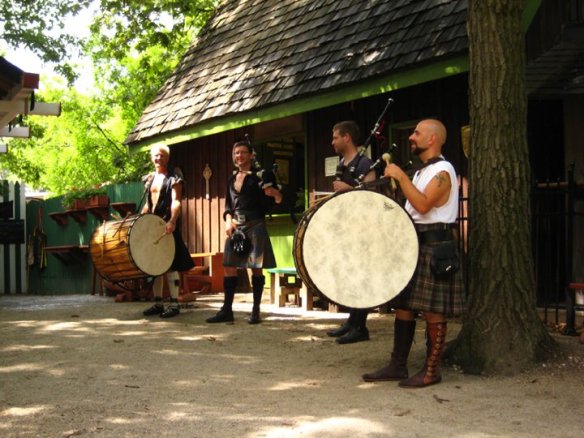 It’s really a shame that I never designed and marketed that mobile app or algorithm that allowed me to retire wealthy at the age of 25. If time and money were unlimited I’d probably continue to play in pipe bands and join Tartanic at the faires today. However, like so many musicians, as I’ve stepped into adulthood it’s become necessary to balance my love of piping with the requirements of day-to-day life.

Balance is the key word. I often think of a headline from The Onion: Find the Thing You’re Most Passionate About, Then Do it On Nights and Weekends For the Rest of Your Life. It’s a sad truth that too many people are forced to put their creative passions on a back burner in favor of a more “traditional” career, like data analyst.

Another memory that I think of in the context of balancing creative pursuits with the costly reality of life in America is a third grade school exercise from my elementary school in Oakland, CA. As a way to get us kiddos thinking about jobs and careers, we designed business cards. I still remember how mine read, in this order:

Anyways, my view is that when you are a musician in your heart, you owe it to yourself to give it your best shot, and fight the urge to give up the gift of that music. So, two years ago I founded Dram and Go, my folk piping trio based here in beautiful Portland, Oregon.

It’s been a slow, steady process to get Dram and Go to where it is now (more on that in a future post) but it allows me to stay connected to piping, avoid the six hour round trip to band practice, and really explore traditional Scottish, Irish, Cape Breton, and other forms of folk music that are really old but new to me.

Last weekend we took our act to the Galway Bay Irish Pub in lovely Ocean Shores Washington. The Galway Bay is also a restaurant, Irish import shop, and cigar shop. I admit I was a little worried that not too many folks would be visiting the Washington coast on a rainy weekend in February. Ocean Shores is a charming town, but it’s not on any major coastal highway, such as US Highway 101.

My worries evaporated when we arrived and began our set. The restaurant was full, the patrons appreciative, and the staff was excellent. Galway Bay hosts all kinds of different Celtic music acts, with an emphasis on Irish music and a healthy dose of rock-n-roll thrown in.

Playing in a folk band is a whole different universe from playing in a traditional pipe band or renaissance faire band. For one thing – it requires a set of skills including marketing and banter that I’ve really had to work on! No one expects an engaging chat between sets when you are in the ranks of a pipe band. And pipers in Tartanic must be friendly, but the real heavy lifting of crowd interaction is handled by Adrian, the charismatic drummer and frontman. Additionally, there’s additional gear to haul, a stage to set up, and appreciative audience members (and hopefully future fans) to chat with on breaks. Also, you have to determine whether this is a massive glass of Guinness, or the door to the patio:

Although the schedules, routines, and aesthetics differ greatly between a highland games, renaissance faire, and lively Irish pub, they have a tremendous amount in common in their effects. All three offer an escape from the cubicle and the monotony of the work week to both performers and audiences alike. The different piping lifestyles I’ve sampled all allow for exploration and innovation while staying rooted in tradition. As life goes on I’m full of gratitude for the experiences and friends that piping has bestowed upon me, and excited to see what comes next!