It’s a Long Way to the Top…

A couple of months ago while browsing facebook, this video came across my feed:

Obviously, there’s a lot going on in this video. It’s particularly striking to me that a wildly popular band like ACDC would make a song that celebrates/laments the struggles of aspiring musicians, and that it happens to be among the best-known rock n’ roll songs featuring bagpipes.

It’s probably just a coincidence. Still, watching that video I can’t help but think of my own experience getting Dram & Go off the ground.

Don’t worry, I’m aware that we’re in no danger of being compared to ACDC! Furthermore, I have nothing but gratitude and appreciation for every festival, pub, and venue that has chosen to have us play. Still, promoting a bagpipe-driven Celtic ensemble in the Pacific Northwest can feel like a Sisyphean task.

For one thing, everyone asks if you’re that unicycle guy.

In all seriousness, a career as a competitive piper prepares you well to play a great birl and E doubling, but in terms of convincing folks to hire your band, it gets you almost nowhere. As competitive pipers (or fiddlers, or flute players) we are trained to seek perfection – in technique, tone, and expression. These are noble pursuits for any musician, but unfortunately they are unlikely to translate into a reliable fan base, which is really what a pub or venue is paying for.

If you are a piper considering taking your hard-fought talents off the boards and onto the stage, prepare for this, at least early on:

Yes, many Dram & Go performances end up being, shall we say, sparsely attended.

The key thing is to appreciate the fact that a venue invited you to play, and that some people (even just one) showed up and stayed to listen.

All artistic endeavors require perseverance, patience, and imagination. That, and lots of turtlenecks:

Even with a bit of musical skill, perseverance, gratitude, and a solid ReverbNation page, the process can be taxing. As the de facto promoter for my band, I have assembled and mailed dozens of press kits and sent hundreds of promotional emails to prospective venues. It may be the cognitive dissonance created by a bagpiper with a Polish last name, but my response rate is likely in the high single digits.

Even when I do get a response, some are dismissive or downright rude. Mostly, I just have to revise my rates significantly downward. This may come as a surprise, but as a solo bagpiper I invariably make more money per paying gig than I do with Dram & Go, by a lot! This is likely because when folks hire solo pipers, it’s generally for a wedding, funeral, or other celebration tailor-made for the music of a single highland piper. There is a significant cost in terms of time and money to maintain a decent sound on the highland pipers (not to mention the kilt, glengarry, shirt, tie, belt, Argyll jacket, sporran, hose, flashes, and gillie brogues which make up the piper’s uniform) and individuals looking to hire a piper tend to be aware and respectful of that.

Dram & Go, or indeed any niche musical act looking to expand their audience, must grapple with the fact that:

Of course, there are numerous examples of great bagpipe-driven Celtic music out there to keep us inspired and hopeful. Molly’s Revenge, MAC, Ben Miller, Will Woodson, and of course the great Fred Morrison are all out there delighting audience, making great music, and generally kicking ass.

There are fewer examples in the Pacific Northwest where we are from (although Puirt Na Gael is a wonderful example), then, say, New England and the North Country in the Eastern US, probably due to their proximity to the cultural hotbed of Nova Scotia. Dram & Go has had numerous highland games, Burns Suppers, Saint Patrick’s Day events, and pub gigs cancelled by the organizers due to lack of community interest, sponsorship, and bar closures. It’s an unfortunate situation when it happens, and it points to the challenges facing any band or organization working to promote a somewhat obscure element of Scottish culture.

One of our goals as a band is to travel to Nova Scotia, Scotland, and the bagpipe-loving Northeast US to take in the culture, enthusiasm, and passion of the musicians there and bring some of that energy back to the Northwest.

Which brings me to one of the most important lessons that I’ve learned over the course of my journey with Dram & Go:

Begrudging others’ success leads to failure, but encouragement and support leads to success. Or, as T Swift would say, “Haters gonna hate (hate hate), and the players gonna play (play play).”

All of this gets me to thinking, maybe Dram & Go just needs to cover some Taylor Swift? It could be our Golden Ticket! Now if you’ll excuse me I need to go barricade my door before my bandmates (and Taylor’s lawyers) break it down and strangle me.

It’s hard to believe, but we’ve finally crossed the finish line at a race we started running nearly 11 months ago – our first professionally-recorded CD! If you’re not familiar with Dram & Go that’s ok: I’m happy to fill you in.

Dram & Go is many things. In the most obvious sense it is a folk band heavily influenced by my background as a Scottish piper. Personally, Dram & Go represents a choice to not only keep piping in my life, but to expand the range in which I engage with the bagpipes.

Allow me to explain. For 10+ years I worked hard to attain a decent sound on the pipes. The main focus here was solo competition 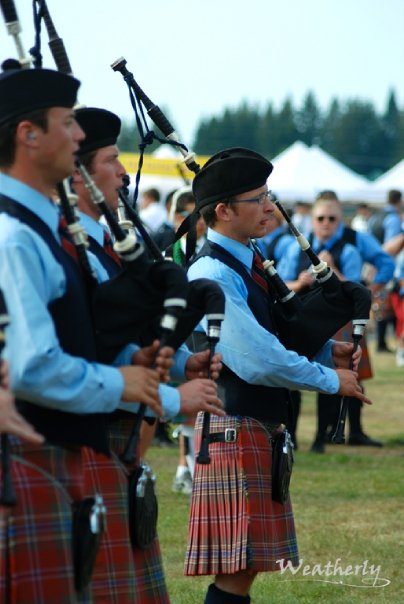 …and a healthy mix of side projects thrown in for good measure. 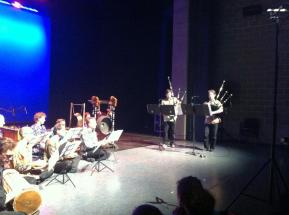 Like many of life’s most worthwhile activities they were equal parts rewarding and exhausting. I met and kept lifelong friends, played some amazing music, and learned a great deal about leadership, camaraderie, discipline, and respect.

Today life is different. The demands of a full-time job, a loving spouse (who wants to see me on the weekends!), and the need to save and plan for the future has made life as a bagpipe rambler…less tenable. So, rather than let all those hours of doubling exercises go to waste, I started Dram & Go. Here’s us doing our thing:

With Dram & Go I can express my own enjoyment of Scottish music alongside Rachel, our awesome fiddler, and Avery, our multi-instrumentalist and Irish music expert. Who’s going to sit around in a pub or festival grounds listening to a three hour borderpipe set, you may ask? It’s a question I’m still trying to answer! What I can say is that since solidifying our lineup we’ve had the opportunity to play at highland games, local pubs, and folk festivals. And people like it!

The Portland region has a lot of great Irish bands. Some are strictly traditional while others mix it up in wild and unpredictable ways. Na Rósaí, Hanz Araki, Colleen Raney, and anything playing at Sam Keator‘s house are always favorites. The hard work of these musicians and their contemporaries is further amplified by the esteemed gentlemen at the helm of 67 Music, Portland’s concierge to Celtic music.

My sincere hope for the future is that Dram & Go can inject a little Scottish “juice” into the turkey of local Celtic music (can you tell Thanksgiving happened recently?) Our mission is to deliver to audiences the hard edge, the attitude, and of course the immense joy that Scottish and Celtic music have given us.

So please, preview and buy the CD on CD Baby, attend our CD release party at Biddy McGraw’s, and follow us on facebook to see what happens next with Dram & Go. Who knows – you might be surprised at what Portland’s Celtic music scene has to offer!

Something to Strive For

A great (and funny) article about Scottish police officer Danny Fleming and his 105 sets of pipes.